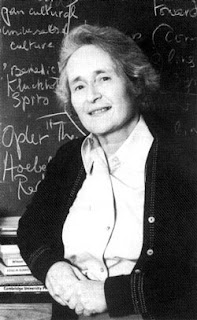 I realise that it's rather off-topic but I want to write a few words (OK, quite a lot of words) about the great Catholic anthropologist, Mary Douglas, before suggesting a few literary links at the end.
When she died in 2007, Prospect Magazine had this to say about her: “Few thinkers have changed how we see the world; even fewer have changed how we think about how we see the world. Mary Douglas, who has died aged 86, is one of the rare exceptions. Her field was culture, but she was as unlike the stereotypical cultural studies academic as one could imagine. A devout Catholic, she spent the last few decades in an extraordinary flowering of inquiry that is now providing insights in fields as diverse as the study of the Old Testament and the politics of climate change.”
It was, in part, the immense range of her writings that made Mary Douglas such a profoundly important figure in British intellectual life in the second half of the Twentieth Century. She wrote books about Purity and Danger, Natural Symbols, Risk and Blame, How Institutions Think, and articles on everything from jokes to good taste, from drink to implicit meanings.

In a fascinating conversation with the historian and anthropologist, Professor Alan McFarlane, she spoke about the influence her convent education had had on her work: the nuns “were very interested in getting us married and they weren’t interested in us getting academic qualifications. But in order to get a grant they had to come up to certain educational standards and be certificated as a teaching school so in fact they were brilliant. Not just one, I had a series of really brilliant women teachers.”

In fact she goes so far as to describe three of her teachers as “quite outstanding intellectuals as well as teachers” and claimed that “to rise up to their standards was quite a challenge”. She also describes having a doctrine class every day which was so special that the students had to wear gloves: “We loved those lessons because the nun was so enthusiastic.”

Brown cotton gloves were also worn out of respect for the Blessed Sacrament whenever the girls went to chapel, while on Feast Days the pupils wore white clothes and white gloves. Some of the trenchant points she made about Friday abstinence in Natural Symbols were surely derived, on one basic level at least, from her experiences at the Convent of the Sacred Heart at Roehampton.

Indeed she became interested in social studies because all pupils were required to take a certificate in Catholic Social Teaching, based on the papal encyclicals. However, the nuns thought Sociology was anti-God and anti-religion so they wouldn’t send her to the LSE. She had to make do with PPE at Oxford instead!

So what has all this got to do with the Catholic English teacher? Three things, I think.

1. Mary Douglas wrote explicitly about literature in her last book, Thinking in Circles.

2. In her last years she also wrote about the Bible from a literary as well as an anthropological perspective: Leviticus as Literature, for example, is a fascinating book because of the multi-disciplinary approach Mary Douglas adopts.

3. Mary Douglas was educated at the same Sacred Heart school as Antonia White but the description she gives of her convent education is quite different from that given by White in Frost in May. I wouldn't wholly knock Frost in May, though I don't like the way it's been used to knock convent education across the board. However, while it's worth remembering that White later returned to her Catholic faith, as described in The Hound and the Falcon, it's also worth remembering that there were others, like Mary Douglas, whose experiences were much more positive from the start.

I'm not naive enough to think that very much of this will ever find its way into the English classroom but I do think that Mary Douglas is a great model of the committed Catholic intellectual and that her books are still very much worth reading. But don't worry: it's back to fiction for my next post.
Posted by Roy Peachey at 00:04