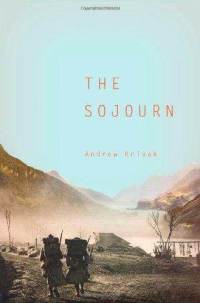 Last November I mentioned not only Siegfried Sassoon but also the former Augustinian friar, William Brodrick, whose novel, A Whispered Name, was a welcome addition to the ranks of First World War novels. This year it's the turn of a former Jesuit, Andrew Krivak, whose novel, The Sojourn, is a National Book Award finalist.

By writing about a soldier in the Austro-Hungarian army fighting on the Italian front, Krivak gives us an insight into an aspect of the Great War which is too little known (nothwithstanding Hemingway's Farewell to Arms). But this is more than a war novel. The narrative is framed by two stories about children who are rescued, the narrator by his mother and another child (but I won't give too much away) by the narrator. This is a novel which is as much about families and migration as it is about the war.

Having said that, the sections which deal with the war are among the best in the book. The part of the novel where Krivak writes about the sharpshooters in action is, I think, particularly fine, although the final post-war sections are also both moving and harrowing.

However, I did have some reservations about the novel. In particular I found Krivak's prose style hard to cope with at times. To put it simply, I thought his sentences were sometimes just too long. Take this paragraph, for instance:

All this time, we spoke in English. The first day he hoisted me into that saddle and we led the herd away from Pastvina, the last he spoke of any Slavic language was to those same Rusyn peasants who greeted him as they took to the fields in Lent with "Slava isusu Khristu," to which he responded "Slava na viki," and then ceased to say a word comprehensible to me, until, by the end of the summer, I knew - and could respond to - the language that was to become our own there in the mountains, and which he insisted that I never speak when we went back to the village, where everyone spoke Slovak, or Rusyn, or Hungarian to outsiders.


I felt like I was being swept away by a flood of subordinate clauses. There were also moments when the language jarred. Take the penultimate sentence in this extract, for instance.

After a time, I asked, "What is left to be afraid of?"
And he said, "The possibility that a life itself may prove to be the most worthy struggle. Not the whole sweeping vale of tears that Rome and her priests want us to sacrifice ourselves to daily so that she lives in splendor, but one single moment in which we die so that someone else lives. That's it, and it is fearful because it cannot be seen, planned, or even known. It is simply lived. If there be purpose, it happens of a moment within us, and lasts a lifetime without us, like water opening and closing in a wake. Perhaps your brother Marian knows this."

Krivak reminds Sebastian Smee of The Boston Globe of Cormac McCarthy, among other writers, so let's compare Krivak's paragraph with one of McCarthy's.

When it was light enough to use the binoculars he glassed the valley below. Everything paling away into the murk. The soft ash blowing in loose swirls over the blacktop. He studied what he could see. The segments of road down there among the dead trees. Looking for anything of color. Any movement. Any trace of standing smoke. He lowered the glasses and pulled down the cotton mask from his face and wiped his nose on the back of his wrist and then glassed the country again. Then he just sat there holding the binoculars and watching the ashen daylight congeal over the land. He knew only that the child was his warrant. He said: If he is not the word of God God never spoke.

Of course it's invidious to quote authors out of context but I think the essential difference between the writers is clear even from these two passages.
Posted by Roy Peachey at 19:50