The Gothic and Catholicism: Religion, Cultural Exchange and the Popular Novel, 1785-1829 by Maria Purves (University of Wales Press, Cardiff, 2009) 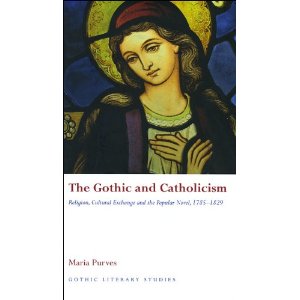 I recently came across a fascinating book which turns on its head an argument expressed on this blog among many other places: that Gothic fiction is rooted in anti-Catholic sentiment. Maria Purves argues that literary critics have missed or ignored many novels which complicate this reading of the Gothic. “At the heart of this study,” she writes, “is a collection of Catholic novels written in the period 1790-1816. These novels complicate the orthodox reading of Gothic as a vehicle for anti-Catholic, anticlerical sentiment. They make Catholic monastic characters heroic and use them to define and demonstrate the value and superiority of Christian piety in a world of unruly emotion and unchecked sensibility.”

Purves sees the Catholic relief Acts of 1791 and 1793 as symptomatic of a wider sympathy for Catholicism in the wake of the French Revolution, a revolution which not only produced a steady stream of émigré priests and religious but which also revealed, to at least some British readers and thinkers, the dangers of fashionable anticlericalism and anti-Christian sentiment.

The key text for Purves is (the Catholic) Alexander Pope’s ‘Eloisa to Abelard’, a poem which provided the model or inspiration for a range of novels and poems which presented religious in a favourable light. In fact, what is perhaps most valuable about her study is the literary archaeology she carries out: a long list of Catholic (or pro-Catholic) novels are unearthed, including Regina Maria Roche’s “major best-seller”, The Children of the Abbey (1794), Eleanor Sleath’s The Orphan of the Rhine (1798),The Monk of the Grotto (Anon, 1800), Catherine Selden’s The English Nun (1797) and Agnes Lancaster’s The Abbess of Valtiera (1816). What is significant about these novels, according to Purves, is that they “all posit spirituality as a means of female fulfilment.” In fact she goes so far as to argue that “the Gothic novel became a vehicle for [the] promotion of Christian devotion.”

Novels such as these “offer a new type of Gothic heroine who challenges our picture of Gothic further. Convents in these novels are not symbols of the superstition, oppression and corruption of the Catholic Church. They are not anachronistic institutions from which enlightened democratic Protestant England is thankfully far removed. Rather, convents are presented as feminine havens where strength and dignity can be restored, or schools in and from which may be learned the value and power of a Christian moral foundation in a cruel world."

Fascinating as this argument is, there are limits to her revisionism. She argues that “a spectrum of opinions, rather than an absolute anti-Catholicism, coloured the years when the Gothic novel flourished". In other words, there was still plenty of anti-Catholicism in this period, an anti-Catholicism which deeply influenced mainstream English literature. However, anti-Catholicism wasn't the only ideology on offer.

In her book Purves offers a closely argued and well-researched reappraisal of the Gothic novel in its early years. The corresponding weakness of the book is that it only covers the early years. What she does not explain is the continuing strength of the anti-Catholic tradition in canonical texts such as Dracula. That was not, she might argue, what she was setting out to do but any discussion of the Gothic which omits, say, Frankenstein, Dracula and The Strange Case of Dr Jekyll and Mr Hyde can only be a partial discussion.

However, that is to quibble. There is much that is refreshing about Purves’s book, including her awareness of  contemporary critical blindspots: “Because Christianity is no longer a dominant aspect of our culture today, scholars habitually underestimate its resonance in the eighteenth century... ," she writes. "There is a tendency to over-represent the status of secularity in eighteenth-century society and assume that a thinking individual, a person of letters, must have disencumbered him or herself of religious belief and its customs... It is essential then that scholarship does not make light of or abbreviate Christian themes, inferring tokenism or satire, when they pervade a literary work or genre of this period. This often happens simply because such themes are more assimilable as irony to the postmodern reader and critic.”

It is a book which deserves to be widely read.
Posted by Roy Peachey at 19:22