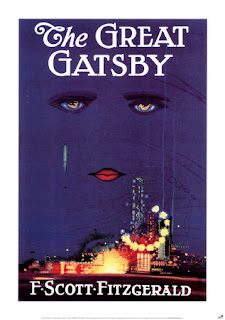 When in 1922 F. Scott Fitzgerald started work on what was eventually to become The Great Gatsby he decided, as he told his publishers, that his new novel would “have a catholic element” to it. This catholic element may not be so obvious in the final version but that may be, as some critics have argued, because Fitzgerald chose to cut the account of Gatsby’s Catholic childhood and publish it separately as the short story, ‘Absolution’. What is certain is that knowing Fitzgerald to be an ex-Catholic helps makes sense of the novel’s great power.

The Great Gatsby is, in part, an indictment of the American Dream but it is an indictment that is framed in religious terms. It is no coincidence that it was “on Sunday morning while church bells rang in the villages alongshore, [that] the world and its mistress returned to Gatsby’s house and twinkled hilariously on his lawn.” Gatsby’s parties provide at least some of his guests with a pseudo-religion and Gatsby himself cannot entirely escape the pseudo-religious net. On reinventing himself as a seventeen year old, we are told, he went about “His Father’s business, the service of a vast, vulgar, and meretricious beauty.”

However, this sentence does not tell the whole story: Gatsby was able to transform his lost Catholicism into something nobler than mere materialism. When he first kissed Daisy, he feared that “his mind would never romp again like the mind of God” but, in fact, “she blossomed for him like a flower and the incarnation was complete.” For Gatsby faith in God is replaced by an ultimately unsustainable faith in human love.

Alongside this incarnational imagery we find a less hopeful set of images in the novel. Immediately after meeting Gatsby for the first time, we are shown “a valley of ashes … bounded on one side by a small, foul river”: before we ever see one of Gatsby’s famous parties we are reminded that dust returns to dust, and ashes to ashes. We also meet Doctor T.J. Eckleburg who presides over this scene of desolation with giant eyes which apparently see all. He may only be an advert for an oculist from Queens but this faded advertisement, Fitzgerald suggests, is what God has become in the modern world: “You may fool me, but you can’t fool God!” the grief-crazed Wilson tells Michaelis after his wife has been killed and “Michaelis saw with a shock that he was looking at the eyes of Doctor T.J. Eckleburg, which had just emerged, pale and enormous, from the dissolving night.”

Throughout The Great Gatsby we are left in no doubt that in the midst of life we are in death so when Wilson finally tracks Gatsby down, Nick Carraway, the narrator, tells us that it was an “ashen figure” which glided out from among the trees and when he shoots him we learn, through yet another example of carefully chosen religious language, that “the holocaust was complete”. Gatsby makes the ultimate sacrifice for Daisy and it is no coincidence that it is described in explicitly Judaeo-Christian terms. What comes after death, though, is not fulfillment but bitter disappointment: the absence of mourners at Gatsby’s funeral simply reveals the emptiness of a life lived for material pleasures alone.

Gatsby’s tragedy is not so much that he loves an unobtainable woman but that he wants to obliterate the past. He does not simply want Daisy to love him: he wants her never to have loved her husband and she can never bring herself to say it, let alone believe it. History cannot be escaped so easily. However, his greatness lies in the fact that he is able to hang onto his pure dream even while caught up in sordid reality. What he cannot hang onto is his life. Mortality is the rock on which all dreams, including the American Dream, are dashed.

It has been argued that The Great Gatsby swings between the lyrical and the satirical. There are some wonderfully funny passages in this novel as well as the purple passages for which it is celebrated. However, it is surely significant that it is the lyrical which finally wins out. Carraway’s sumptuous prose – prose as sumptuous as any of Gatsby’s parties - suggests that yearning is not to be rejected: Gatsby “believed in the green light, the orgastic future that year by year recedes before us.” If the novel swings between the lyrical and the satirical it comes to rest, finally, on the side of the lyrical. However, about the source of that lyricism it has nothing to say.
Posted by Roy Peachey at 15:59