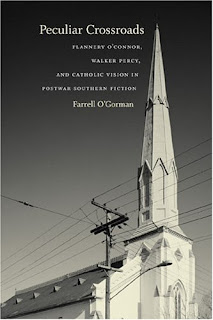 I recently went into the public library in Cambridge – a place not entirely without culture – in search of one of Flannery O’Connor’s books. Not being able to find it, I asked one of the librarians. Our conversation went something like this:

“I wonder if you could help me. I’m looking for a book by Flannery O’Connor.”
“What sort of things did he write?”
“He was a she.”
“OK, so what did she write?”
“Mainly short stories but I’m looking for some of her essays.”
“Well, Irish Literature is over there.”

At that point I decided to give up and look for myself. I dread to think what would have happened if I had asked for anything by Walker Percy.

It may be that I was just unlucky that day but I don’t think so. The sad truth of the matter is that, across the UK, Flannery O’Connor’s works are hard to come by and Walker Percy’s all but impossible. So why is this the case? Could it possibly be because these two great Catholic authors are too inextricably linked with the American South? Are they merely regional writers who have nothing to say to a wider audience? And, if they are, is a Brit really the best person to be reviewing a book about them?
O’Connor herself knew how powerful the charge of regionalism could be and hit it head on in one of her many powerful essays, arguing that “the best American fiction has always been regional.” It was the very fact that she was grounded in a community, she thought, which enabled her to reach out to a wider audience. Being a regional writer, far from being a weakness, was almost a necessity. However, there was far more to her fiction than an interest in Southern mysteries and manners. She operated, as she put it in that same essay, “at a peculiar crossroads where time and place and eternity somehow meet.”
This idea gives Farrell O’Gorman not only his title but also, more importantly, the whole basis of his book. What he shows is that each branch of this peculiar crossroads was important to O’Connor and Percy: the importance of the South perhaps goes without saying but O’Gorman also demonstrates how their interest in eternity allowed them to write about the contemporary world in a new and highly influential way. Far from being constrained by what some at least saw as a moribund Southern literary tradition, Flannery O’Connor and Walker Percy were largely responsible for breathing new life into it, not despite their Catholicism but precisely because of it. In particular, they drew heavily upon the work of Romano Guardini and Jacques Maritain when developing their own distinctive Catholic vision. They were not just Catholics, O’Gorman argues, but Catholic existentialists and so, unlike many of their contemporaries and most of their southern predecessors, did not shy away from the postmodern world in which they found themselves after World War II. While their distinguished mentors, Allen Tate and Caroline Gordon, could never quite shake off the dead hand of the past, O’Connor and Percy were both ready for this postmodern world precisely because they embraced the European Catholic revival. If this is mere regionalism it is a very peculiar form of it.
O’Gorman’s book covers a lot of ground. There is a great deal of interesting detail about Percy’s and O’Connor’s family backgrounds and family circumstances; there are chapters on Catholic theories of fiction and an interesting survey of Southern authors influenced by Percy and O’Connor. There are other books which deal with one or other of these topics but what makes O’Gorman’s book distinctive is the way he brings his theologically informed literary criticism to bear on both Percy and O’Connor. By demonstrating that they were not simply Catholic authors who happened to be writing at roughly the same time and in roughly the same place, by showing that they shared a philosophy, O’Gorman is able to argue strongly that together they helped to reshape both Southern literature and Catholic fiction.
If there is a problem with regionalism, in other words, it is British regionalism that’s the problem. There is no reason at all why these two authors should not be well known on both sides of the Atlantic. Inspired by Peculiar Crossroads I am now determined to dig out more of Percy’s and O’Connor’s books, however much my local librarians might try to prevent me.
Posted by Roy Peachey at 21:21