Muriel Spark - 'Symposium' and other novels 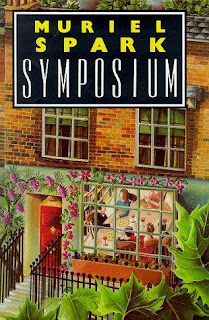 Muriel Spark is an absolute godsend for English teachers. Her novels are (really) short, (usually) funny and (always) thought-provoking.

The most well-known of her 22 novels is The Prime of Miss Jean Brodie but Spark does not deserve to be remembered as a one-book wonder. She was, in fact, one of the most innovative and quirky novelists of the 20th Century. However, perhaps more than any other novelist of her age, she suffered from her determination not to be labelled. Writing about everything from desert island castaways to convents, from Lord Lucan to finishing schools, Spark always kept her readers guessing about what was coming next.

This same variety can be seen within individual novels too. Symposium, for example, is part comedy, part tragedy, part murder-mystery and part philosophical entertainment. There are sections, such as the chapter that deals with the sometimes foulmouthed, Marxist, Anglican nuns of the convent of Mary of Good Hope, which are sheer comic genius and there are others which dwell, more disturbingly, on the nature of evil.

The plot revolves around a dinner party in a fashionable part of London - part of the joke is that the classical symposium has been reduced to this - but the reader is left guessing for much of the book about which of the various guests and servants are really important. Only gradually does it become apparent that murder is afoot and only gradually does the narrator focus on one of the guests in particular, though it remains far from certain how much responsibility even this character has for any of the deaths and disappearances that soon litter the narrative.


What John Lanchester says in his excellent introduction to The Driver's Seat could equally well apply here: "Her stories always pose a set of questions. In the course of the novel most of them are resolved ... But once we have the answer, the larger sense of mystery and strangeness in the book always remain, and we are left with a lingering sense that the question we've had answered somehow misses a larger point."

In fact, what we discover the more we read is that Spark is playing with us. Just as her characters struggle to explain the deaths, so too do we struggle to piece together the clues we have been given. As in so many of Spark's novels, the relationship between the omniscient narrator and the characters mimics the relationship between God and his creatures. There is free will but the characters often fail to realise either how free they are or in what ways their freedom is bound up in the greater freedom of the novelist herself.


In The Finishing School, for example, an aspiring author says: "my characters are so real, so very real. They have souls. If you are writing a novel from the heart you have to deal with hearts and souls. The people you create are people. You can't control people just like that. Chris is writing a novel where he controls people."


We see something similar in The Driver's Seat where the narrator quite happily tells us what is going to happen next but also refuses to look into her characters' minds: "Who knows her thoughts? Who can tell?" she asks disarmingly at one point.


The contrast with Jean Brodie who "thinks she is Providence, thought Sandy, she thinks she is the God of Calvin, she sees the beginning and the end" could not be clearer.


What we get in Symposium then is a novel in which issues of guilt, responsibility, madness and predestination are raised, played around with, and then (apparently) discarded. Most of the murders remain unsolved and the would-be murderer is thwarted by more efficient criminals who get there before she does. All this makes Symposium sound heavy-going but nothing could be further from the truth. The pace is fast, the dialogue witty and the comedy sure-footed. This is a novel to enjoy and the good news is that there are plenty more novels where this one came from.
Posted by Roy Peachey at 12:44