Graham Greene - 'The Ministry of Fear' 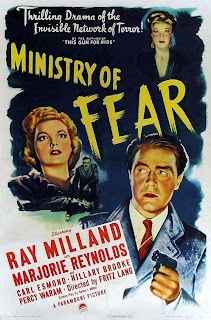 I'm with Flannery O'Connor in thinking that "the question of what effect the Church has on the fiction writer who is a Catholic cannot always be answered by pointing to the presence of Graham Greene among us."

Nevertheless, as recent writings remind us (here and here), he cannot be wholly ignored either. One book which often gets lost in discussions about his work and which is worth revisiting is The Ministry of Fear which begins with Arthur Rowe, a convicted murderer, popping into a fête during the darkest days of the London blitz only to be drawn into contact with a Nazi spy ring.

Greene called his novel an ‘entertainment’ but it is clearly much more than that. Despite creating one or two implausible moments in the plot, Greene draws us into the action from the very first pages and doesn’t let us go. The descriptive writing is tremendous and the sense of fear is utterly palpable.
What is more, there are big existential questions too. Rowe is haunted by guilt and confused by pity. While everyone else believes that the death of his wife was a mercy killing, Rowe himself accepts the fact that he is a murderer, though he cannot quite come to terms with the psychological implications. He is a man who, while fleeing for his life, is also desperately seeking redemption and, having fallen from grace, is haunted by memories of his own personal Garden of Eden. It is no surprise then that he book is packed full of references to gardens, usually from his innocent childhood.
Greene also returns time and again to the notion of fiction and its relationship with real life in his novel. Pre-war sentimental novels, he suggests, have to give way to thrillers precisely because the Second World War has lifted the lid on human depravity: “thrillers are like life – more like life than you are, this lawn, your sandwiches, that pine,” Rowe tells his mother in a dream. “This isn’t real life any more,” he said. “Tea on the lawn, evensong, croquet, the old ladies calling, the gentle unmalicious gossip, the gardener trundling the wheelbarrow full of leaves and grass. People write about it as if it still went on; lady novelists describe it over and over again in books of the month, but it’s not there any more.”

In other words, there is plenty of literary interest in this thriller, which makes it an ideal book for classroom use. But how Catholic is it?

When Arthur Rowe eventually finds redemption, it is hardly a Catholic concept he embraces: he atones for his wife’s murder, he believes, by suffering for his new lover. This idea may be derived from Rowe’s own Catholic beliefs but it hardly does justice to the orthodox Catholic understanding of the redemption. We have to be careful, of course. Greene once pointed out that “the ideas of my Catholic characters, even their Catholic ideas, were not necessarily mine.” Nevertheless, it is also true that, to use wholly anachronistic terms, Arthur Rowe finds the redemption he seeks having committed euthanasia by assisting in a suicide.

Sin and redemption feature prominently in this novel, just as they do in so many of Greene's other books, but Christ scarcely gets a look in. In the end this is a novel which draws as much on a worldview associated with Matthew Arnold and Thomas Hardy as it does on Catholic sources. Greene also draws upon the Henry James of The Golden Bowl in having Arthur Rowe and Anna Hilfe sustain their love through mutual deception at the end of the book. In one sense, there is no problem with this - it gives students plenty to get their teeth into - but we do need to be clear about what we are serving up.

Brilliant writing, an exhilarating plot and dodgy theology: you know what you’re going to get from Graham Greene and in The Ministry of Fear he gives you the lot.