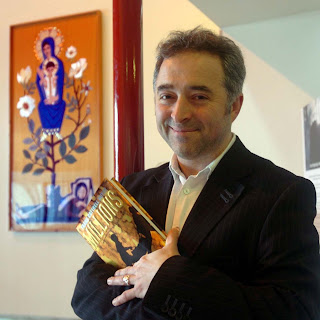 I have written before about Frank Cottrell Boyce, a fascinating author and all-round nice guy. (See here and here and here.)

One of his strengths is that he is difficult to pigeonhole: a homeschooling Catholic parent who used to write reviews for Living Marxism; a scriptwriter for Brookside and Coronation Street who has a D.Phil in 17th Century History; a co-creator of the Olympics opening ceremony who writes great children's books.

In this interview with The Guardian he makes all sorts of interesting points. I've picked out just a few:

In Chitty Chitty Bang Bang, the flying car with a mind of its own, he was presented with a readymade vehicle with which to attempt all these things. Compared with the highly personal ideas and experiences that lay behind previous books, the continuation of the Fleming brand looks baldly commercial. But there is charm and humour in Cottrell Boyce's two sequels (the original was published in three instalments: the plan is to copy this formula and call it a day). This is partly drawn from his pleasure in the fact that the original is that rare thing, an adventure story in which the parents are invited along.
"That would certainly never happen in Roald Dahl," he says. "The problem I had with Chitty is that people remember the movie, which is a Dahl movie [Dahl wrote the screenplay] … there's a supercar, a supervillain and lots of sexual perversity." The Fleming original, by contrast, is "very sweet".

Meanwhile Cottrell Boyce and his wife, now back in Liverpool, carried on having children. In all they have seven, aged between eight and 27, four boys and three girls. From his account it is a warm and close family, with the youngest children home-schooled mainly because their parents like having everyone together in the house, but also to shield them from the highly commercialised peer pressure Cottrell Boyce describes as "weaponised advertising". His view of celebrity culture magazines such as Closer borders on disgust.

"Being read to at school changed my life. I really became aware of that during the Olympics because we were all of us in that room drawing on stuff we'd read as children and none of it was stuff we were examined on, it wasn't anything measurable. It was stuff that people had shared with us that we went on to share. If you look at that ceremony and what was in it, it was a sense of wonderment in storytelling. We found we had this common heritage – Mary Poppins and so on."

Although he probably wouldn't say so, Cottrell Boyce is a writer with a clear moral purpose, who believes the whole point of books is to extend our imaginative reach, and give us pleasure in the process. Recently he has been reading stories by George Saunders, recommended by his adult sons, and the children's books of Rumer Godden with his youngest.

He says he is slow, prone to distractions, and when asked why he did something often names a person or a favour ("I'm very big on loyalty, very big on friendship maybe").
Posted by Roy Peachey at 21:59