Newman, Hopkins, the Saints and Literature 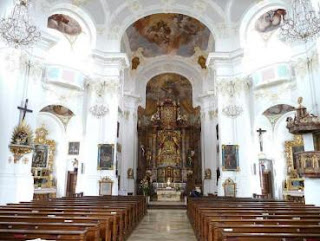 It has been quite a fortnight for saints with a literary connection.

Today is the Memorial of Blessed John Henry Newman, the only novelist (I think) to have been recognised as a saint (see here, here, here and here for my earlier thoughts on Newman). Not that his work as a novelist (any more than St Thomas More's work as a writer) was what led to him being beatified.

Newman was an inspirational figure in all sorts of ways even during his own lifetime as I was reminded when I was in the Church of St Aloysius Gonzaga in Oxford this weekend, because not only did Newman preach there but it was also where Gerard Manley Hopkins, who was received into the Church by Newman, was a curate (see also here).

In recent days we have remembered St Francis of Assisi (4th October) about whom the novelist Julien Green (among many others) has written, Blessed Columba Marmion (3rd October) whose Christ in His Mysteries (available here for free in French and here for a price in English translation) inspired Messiaen's Vingt regards sur l'enfant Jesus, and the Holy Guardian Angels (2nd October), whom I mentioned the other day. And that's without even starting on those great writers: St Therese of the Child Jesus and St Jerome.

I should also mention Henry Garnett's The Blood Red Crescent and the Battle of Lepanto in connection with the Memorial of Our Lady of the Rosary last Sunday.

That should keep us going for a while.