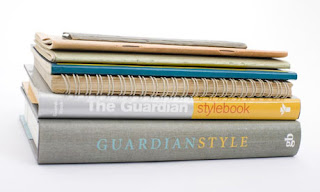 The Guardian Style Guide is very useful but, as The Guardian would be the first to admit, it's not perfect. It has some very useful advice for budding journalists and, indeed, for all writers and is well worth using in the classroom but it also has one or two blindspots.

However, I did wonder what it had to say about the Catholic Church and this is what I found:

but if you mean Roman Catholic, say so

Which didn't seem very helpful. So I looked up Roman Catholic and this is what I found:

The archbishop of Birmingham, Cardiff, Glasgow, Liverpool, St Andrew's, Southwark and Westminster: it is not normally necessary to say Roman Catholic (as there is no Anglican equivalent).
The Roman Catholic bishop of Aberdeen, Argyll, Lancaster, Plymouth, Portsmouth, Shrewsbury (for all of which there are Anglican bishops).
Unless obviously Roman Catholic from the context, say the Roman Catholic bishop of Brentwood, Clifton, Dunkeld, Galloway, Hexham and Newcastle, Leeds, Menevia, Middlesbrough, Motherwell, Northampton, Nottingham, Paisley and Salford.
In a UK setting use Roman Catholic in describing Roman Catholic organisations and individuals and wherever an Anglican could argue ambiguity (eg "the Catholic church"). But Catholic is enough in most overseas contexts, eg Ireland, France, Italy, Latin America

But I suppose we should be grateful for small mercies. In 1928 neither "Catholic" nor "Roman Catholic" made it into the guide at all.
Posted by Roy Peachey at 17:25