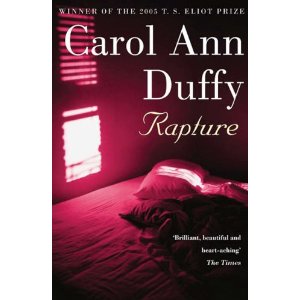 One of the most striking features of Carol Ann Duffy's Rapture is the sheer amount of religious language it contains, which is perhaps not surprising when we recall that Duffy was brought up and educated as a Catholic:

Time and time again, Duffy turns to religious language (and to myth) to supply the words and significance she seeks in the relationship described in Rapture. As with Samuel Beckett, Duffy believes that "all poetry is prayer". Or, as she puts it elsewhere: "Poetry and prayer are very similar. I write quite a lot of sonnets and I think of them almost as prayers: short and memorable, something you can recite."

So what does this mean in practice? The hermeneutic key to this particular set of references can be found in 'Over', the last poem in the collection, in which the abandoned lover asks, "What do I have / to help me, without spell or prayer, / endure this hour, endless, heartless, anonymous, / the death of love?" The immediate answer is memories and the implicit answer is poetry. But without myth ("spell") or prayer neither memory nor even poetry itself seems strong enough to fill the gap. For those who still believe, the "Christmas dawn" that ends Duffy's poetic journey has a significance that maybe even the poet herself cannot see.
Posted by Roy Peachey at 00:45