Poem of the Week 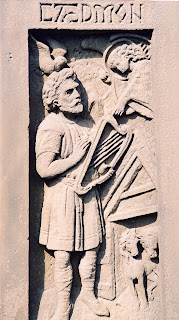 I have a Poem of the Week in my classroom and normally I put pretty accessible stuff on display. However I also try to widen my students' poetic range, so this week I've gone for one of the earliest poems in the English language and the first by a poet whose name we know. You can read more about Caedmon and his poem here and you can hear the poem (in Old English) by clicking here.


Poems like this remind us that, as G.K. Chesterton put it, "English literature was English a long time before it was Protestant" but they also give us a useful way into discussions about so-called regional literature, rhythm and structure. Caedmon's poem also reminds us that, far from inventing Middle-earth, Tolkien tapped into a rich and largely forgotten tradition of (Catholic) English literature.

Now let me praise the keeper of Heaven's kingdom,
the might of the Creator, and his thought,
the work of the Father of glory, how each of wonders
the Eternal Lord established in the beginning.
He first created for the sons of men
Heaven as a roof, the holy Creator,
then Middle-earth the keeper of mankind,
the Eternal Lord, afterwards made,
the earth for men, the Almighty Lord.

In the beginning Cædmon sang this poem.
Posted by Roy Peachey at 20:34