Reclaiming or Renaming the Middle Ages 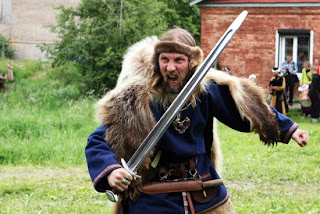 As I have mentioned before in another context, "medieval" and "the Middle Ages" are loaded terms. As C.S. Lewis puts it in English Literature in the Sixteenth Century: "the very idea of the 'medieval' is a humanistic invention. (According to Lehmann it is in 1469 that the expression media tempestas first occurs.) And what can media imply except that a thousand years of theology, metaphysics, jurisprudence, courtesy, poetry, and architecture are to be regarded as a mere gap, or chasm, or entre-acte? Such a preposterous conception can be accepted only if you swallow the whole creed of humanism at the same time." (p.20)

Unfortunately it seems as though that creed really has been swallowed whole. The Middle Ages are now synonymous with obscurantism, cruelty and myopia. One of the Oxford English Dictionary's definitions of 'medieval' (which, incidentally, is first recorded as late as 1817) is: "Exhibiting the severity or illiberality ascribed to a former age; cruel, barbarous".

But this isn't the only problem. The OED also defines the Middle Ages as "The period in European history between ancient and modern times, now usually taken as extending from the fall of the Roman Empire in the West (c500) to the fall of Constantinople (1453) or the beginning of the Renaissance (14th cent.); the medieval period;esp. the later part of this period, after 1000." These are, of course, arbitrary dates. One of the problems of the term is that it is notoriously vague. When exactly were the Middle Ages? It depends who you ask.

Or it depends on what is being attacked. Let's look at the first three quotations the OED chooses in support of its definition:

[1570    J. Foxe Actes & Monumentes (rev. ed.) I. iii. 204/1   The primitiue tyme of the church,‥the middle age, and‥these our latter dayes of the church.]
1605    W. Camden Certaine Poems in Remaines of Greater Worke 2,   I will onely giue you a taste of some of midle age, which was so ouercast with darke clouds, or rather thicke fogges of ignorance.
1624    H. Wotton Archit. sig. ¶4,   After the reuiuing and repolishing of good Literature, (which the combustions and tumults of the middle Age had vnciuillized).

'The Middle Ages', in other words, is not a neutral description. It is not a mere description of an era. It is a convenient term of abuse, a term of abuse often reached for when describing the Church of Rome, which, supposedly, brought the "thicke fogges of ignorance" and, in so doing, "vnciuillized" literature.


I could go through example after example of great learning and great literature from c500 to 1453 but, even if I did so, the words "medieval" and "the Middle Ages" would remain. So we have a choice. Either we attempt to reclaim the Middle Ages from those who would see those wonderful, diverse centuries as "cruel" and "barbarous" - by using sites such as this one in our teaching - or we try to rename them. Or, perhaps, we just point out the ways in which we can be manipulated by the language. Either way we have a huge task in front of us.
Posted by Roy Peachey at 21:09