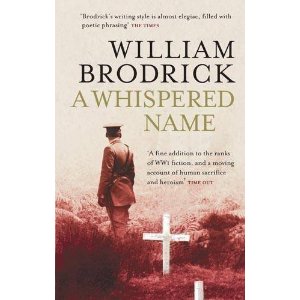 Last November I briefly mentioned William Brodrick's A Whispered Name. Follow the link to see an interview with the author or read on for a more detailed review, which will also shortly appear at www.catholicfiction.net:


William Brodrick’s Father Anselm novels are very welcome additions to the literary canon. There are many fine novels about World War I but, in A Whispered Name, Brodrick gives us something new: a compelling mystery about a First World War deserter and his mysterious links with an officer who went on to become a priest and monk.

Brodrick’s Father Anselm, who finally uncovers the mystery, is the latest in a long line of priest-detectives. What makes this novel different is the detailed knowledge Brodrick, a barrister and former Augustinian friar, brings to his writing. He creates, in Larkwood monastery, an entirely believable monastic community and fills it with psychologically credible individuals.

He also creates a genuinely intriguing, if slow-moving, plot. A chance meeting with an elderly man and his daughter in Larkwood monastery’s cemetery forces Anselm into carrying out an investigation into the story behind the apparent execution of a young Irish soldier for desertion during the slaughter of Passchaendale in 1917. What he discovers – without wishing to give too much of the plot away – is a complex and intriguing tale of courage behind a veneer of straightforward military cowardice.

A Whispered Name – the title is taken from a Sassoon poem – is both a well-plotted crime novel and a powerful reconstruction of some of the worst days of that terrible war. It won the 2009 Crime Writers’ Association Gold Dagger Award but it is a literary rather than a popular novel. Brodrick writes well and gets his legal and military details right; however, what really makes the book are the rounded characters. A Whispered Name is no page-turner but it is a gripping and powerful account of ordinary people in extraordinarily difficult times.

I did find myself wondering for much of the book what difference it made having a monk as investigator but, by the end of the novel, I was convinced. What starts off as a war novel and a murder mystery of sorts becomes a profound meditation on faith and life. After 300 pages, many military horrors, and a few clever twists, we are left thinking not just about the horrors of war but also about the possibility of redemption.
Posted by Roy Peachey at 21:56 No comments:

From 'abortion' to 'termination' with the OED

Studying language use in advertising or by the military is an established aspect of English teaching. As Catholics we might also choose to enter into the realms of ethical debate. The OED, for example, can be used to help us track how 'terminations' have recently replaced 'abortions'.

'Abortion' is defined firstly as:

"The expulsion or removal from the womb of a developing embryo or fetus, spec. (Med.) in the period before it is capable of independent survival, occurring as a result either of natural causes (more fully spontaneous abortion) or of a deliberate act (more fully induced abortion); the early or premature termination of pregnancy with loss of the fetus; an instance of this."

The OED further explains that:

"In modern general use the unmodified word generally refers to induced abortion, whether caused by drugs or performed surgically, and the term miscarriage is used for spontaneous abortion."

The first recorded use of the term in English is to be found in Erasmus, writing in c.1537: "To the phisicians craft he oweth his lyfe, ye whiche as yet hath nat receiued life, whyle thrugh it abortions be prohibeted."

'Termination', by contrast, is defined as:

"The action of terminating or fact of being determined (in various senses)". For example, "c1450 in G. J. Aungier Hist. & Antiq. Syon Monastery (1840) 359 The abbes‥schal make al the terminacions in the chirche."

"The action of ending", including "the ending of pregnancy before term by artificial means; an induced abortion" which is first recorded in 1969 in the Times: "Women denied a legal abortion commonly seek termination elsewhere."

The OED's other two references are equally interesting:

1973 Times 26 Nov. 6/1 The pregnant women walking about the hospital ward were all in for abortions. Or terminations, as they called them— a much nicer word.

1978 F. Weldon Praxis xxiv. 256 You can't possibly go through with the pregnancy.‥ If you don't have a termination, you're finished.
Posted by Roy Peachey at 22:07 1 comment:

'The True Story of the Novel'

Georg Lukács famously argued that "the novel is the epic of a world that has been abandoned by God."


Well, not according to Margaret Anne Doody. In The True Story of the Novel she argues not only that “the Novel has a religious well-spring" (p.172) but also that "a certain chauvinism leads English-speaking critics to treat the Novel as if it were somehow English, and as if the English were pioneers of novel-writing – ignoring, for instance, the very visible Spanish novels of the sixteenth and early seventeenth centuries. A consideration of Spanish phenomena alone would lead to an admission that Catholicism and a pre-modern economic setting could also give rise to the Novel." (pp.1-2)


The novel need not be seen as a post-Protestant, secular genre. In fact she goes out of her way to point out that "in twentieth-century criticism the Novel is seen also as not only displacing but replacing myth, or religious narrative, or rather religion – customarily Christianity- itself. … We accept such a view as literal history (instead of as an image) only at the cost of ignoring the facts."(p.3)


Doody is no Catholic apologist and I wouldn't necessarily endorse all of her arguments but she does effectively demonstrate how narrow-minded English literary criticism has sometimes been. She also provides the groundwork for some interesting Catholic interpretations of the novel. She argues, for instance, that "what we term 'the Rise of the Novel,' meaning the advent of Prescriptive Realism, was Protestant enough to dismiss Mary out of hand" (p.453) and attempts to redress the balance by having a whole section of her book on Mary.
Posted by Roy Peachey at 20:42 No comments: 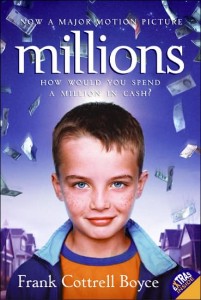 Frank Cottrell Boyce is a highly successful scriptwriter and children’s author who also just happens to be a committed Catholic. You can read the transcript of a wonderful interview he gave to the BBC here. Cottrell Boyce’s relentless enthusiasm for his faith comes across in spite of, or perhaps because of, the persistent attempts of the interviewer to find some sign of dissent to latch onto.

Millions (which was first conceived as a film directed by Danny Boyle of Trainspotting fame) is probably Cottrell Boyce’s most obviously Catholic book. Damian, the Year Five narrator, is obsessed with saints and sees them at regular intervals throughout the novel. Whether he is suffering from a religious mania as a result of his mother’s premature death or whether he simply has a childlike faith is never made explicit.

The saints he meets sometimes speak and behave as if they are extensions of Damian’s subconscious mind, which suggests the former interpretation, but, on the other hand, they do also guide and inspire him when he is faced with the book’s central ethical dilemma: what to do when thousands of pounds fall, almost literally, into his lap.

For this is what Millions is really about: the destructive power of money and how to cope with it. Damian may be an odd boy who is struggling to cope with the loss of his mother but he is also the one who, ultimately, manages to do the right thing when faced with this wholly unexpected windfall.

Millions is not a book to be taken too seriously - some of the characters are caricatures in the best Dickensian tradition and some of the basic premises, like the Euro switchover day, are barely credible – but that doesn't really matter because it's meant to be funny.

The New Atheists would have us believe that Catholicism is a joyless religion but the sheer number of Catholic comic novelists (quite apart from anything else) give this charge the lie. Cottrell Boyce’s Catholicism, as he explains in this EWTN interview (Cottrell Boyce appears 34 minutes in), is a liberating force and so it is hardly a surprise that Millions, like all his other books, is full of life, vitality and good humour.

We hear a lot about the decline of the Catholic novel: here is one Catholic writer who is very much alive and kicking.
Posted by Roy Peachey at 19:52 No comments:

The poetry of Michael Symmons Roberts is well worth looking at. In particular, at this time of year, his Epiphany poem, 'The Gifts', from the Whitbread Prize-winning Corpus works really well in the classroom because children are naturally intrigued by the question of what Mary and Joseph did with the gifts of Gold, Frankincense and Myrrh.

You can hear the poet reading from Corpus here and can read an interesting profile here. To get the poem itself you'll need a copy of the book.
Posted by Roy Peachey at 14:27 1 comment: