With the Prix Goncourt, France's most prestigious literary prize, due to be awarded in the next few days, I thought it might be worth having a quick look at contemporary French literature. (For previous posts on French lit, click here, here and here.)

Last year's winner was Le sermon sur la chute de Rome by Jérôme Ferrari. I know that I am inclined to grass-is-greenerism but I can't quite imagine a prize-winning novel in the UK drawing its title and its chapter headings from St Augustine.

The year before the prize was won by Alexis Jenni with L'art français de la guerre. What drew most comment was the fact that Jenni was a schoolteacher who wrote this, his first novel, on Sundays when he had a bit of free time, but I couldn't also help but notice his deep-rooted Catholicism.

Another winner of the Prix Goncourt (though in a different category) is Eric-Emmanuel Schmitt with Concerto in Memory of an Angel, which features a story about redemption based around a reworking of the Cain and Abel story.

But it's not just the Prix Goncourt winners who stand out. Another really interesting author is Claire Daudin, who writes clearly in the French Catholic literary tradition. She is not just a novelist in her own right - Le Sourire was the winner of le prix 2009 des Journées du Livre Chrétien - but she is also something of an expert on Peguy, Bernanos and Mauriac.

What else you get in France more than in the UK are translations. So the novels of Catholic novelists like Martin Mosebach (Germany), Juan Manuel de Prada (Spain), Nguyen Viet Ha (Vietnam) and Fan Wen (China) are all much more readily accessible than they are over here.

And if that isn't enough to get you excited, there's a new Asterix book out too.
Posted by . at 16:40 No comments:

The US National Book Awards finalists have just been announced and among them is Gene Luen Yang in the Young People's Literature section. I have written about Yang a few times before and so I'm delighted to see him on the list.

Someone by Alice McDermott was longlisted but progressed no further.

Fr Tim Finigan has posted a link to this interview with Evelyn Waugh on his blog. It's full of wonderful one-liners, mainly because he seems to go out of his way to avoid two-line answers. The only time he really gets carried away is when talking about Helena and the True Cross.

I particularly enjoyed his answers about Oxford.

When asked why he chose to go to Hertford College, he replied: "They paid me."

When asked why he got a bad Third he gave an even briefer answer: "Sloth."

"What did you do at Oxford?" the interviewer asked. 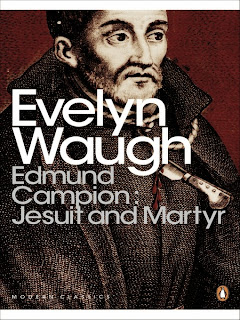 The novel is the genre of our age, so much so that other forms of writing are often quietly ignored. However, it was not all that long ago that literature meant so much more than fiction. So, for example, I wonder how often Waugh's wonderful biography of Edmund Campion appears on reading lists alongside Brideshead Revisited and The Sword of Honour trilogy (which, incidentally, is BBC Radio 4's current classic serial).

In his preface, Waugh writes: "There is great need for a complete, scholar's work on the subject. This is not it. All I have done is select the incidents which strike a novelist as important, and relate them in a single narrative." For Waugh himself, there seemed to be little difference between his work as a novelist and his work as a biographer.

But what of the book itself?

There are some wonderful passages, as you might imagine. Take this one on Pope Pius V's excommunication of Queen Elizabeth: "It is possible that one of his more worldly predecessors might have acted differently, or at another season, but it was the pride and slight embarrassment of the Church that, as has happened from time to time in her history, the See of Peter was at this moment occupied by a saint."

Or this one describing Campion's prayers in the moments before his execution: "They called to him to pray in English, but he replied with great mildness that 'he would pray God in a language which they both well understood.'" The glory of that put-down is Campion's rather than Waugh's but it could so easily have been a phrase used in a Waugh novel.

In the edition of the book which I have, the subtitle is "Scholar, Priest, Hero, Martyr". I see that's been changed to "Jesuit and Martyr" in the Penguin Classics edition. The former follows the pattern of Waugh's chapter headings. I wonder which subtitle is the one Waugh would have wanted.
Posted by . at 21:57 No comments: