After the Pope's Visit 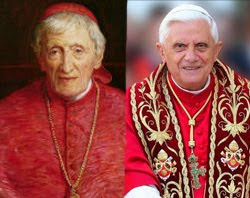 The impact of the Pope's visit to the UK will be felt for a very long time. The Year of Catholic Education could prove interesting for a start but I want to focus on the significance of Newman's beatification.

As the Anglican Bishop of Gibraltar in Europe, Geoffrey Rowell, pointed out, Pope Benedict quoted from Newman's Anglican sermons during his beatification homily. It is striking how many great Catholic works of literature were written by authors on their way to the Catholic Church, the most obvious examples being Newman's An Essay on the Development of Christian Doctrine, G.K.Chesterton's Orthodoxy and two of the Father Brown collections, and Sigrid Undset's Kristin Lavransdatter. We need to be careful not to limit our definitions of Catholic Literature.

﻿
Here's an A4 sheet I've provided for some of my students:

Newman has been hugely influential. In his lifetime he was a very well known public figure and was eventually made a cardinal a few years before his death. He has since inspired people from all sorts of backgrounds, ranging from the Pope himself to Sophie Scholl, the young Protestant student who stood up against Hitler and was executed as a result (as you can see in the excellent movie about her life).

Newman (1801-1890) was not just a priest but a poet, a novelist and a great theologian too. His two novels are Loss and Gain, which deals with someone looking for meaning in his life in 19th century Oxford, and Callista, a book about the persecution of Christians in the Roman Empire.

His most famous poem is The Dream of Gerontius, which was set to music by Edward Elgar. Some of his poems are now well known as hymns, notably ‘Lead Kindly Light’ and ‘Praise to the Holiest in the Height’.

He was also really important in the world of education. He was the first rector of what is now University College, Dublin and wrote a highly influential book called The Idea of a University about what an ideal university education should consist of. However, the book he is perhaps best known for is Apologia Pro Vita Sua, in which he explains why he converted from Anglicanism to Catholicism.

Newman was an expert on the early history of Christianity but he was not stuck in the past. He looked backwards in order to move forwards. He once famously wrote that “to live is to change and to be perfect is to have changed often.” That seems like a pretty good motto to live by.
Posted by Roy Peachey at 21:07 1 comment: