The forthcoming papal visit to the UK has brought the life and work of Cardinal Newman back into sharp focus.

As one of the greatest thinkers and writers of the 19th Century, Newman has been horribly neglected in the classroom, perhaps in part because his fiction does not reach the same heights as his apologetic work.  However, now is perhaps the time to reintroduce him into the curriculum.

There are some wonderful introductory works by Ian Ker on Newman, including the definitive biography, but the biography is long and life is short, so perhaps there is something to be said for cutting out the middle man and going straight to Newman's writings themselves, especially as The National Institute for Newman Studies has done a wonderful job of putting Newman's work online.

One obvious place to start would be 'The Dream of Gerontius'. Elgar's musical version is now much better known than the original poem but there is enough here to appeal to any student, albeit in a form that will be probably be deeply unfamiliar and initially off-putting.

There was so much to Newman but we have to start somewhere and 'The Dream of Gerontius' is as good a place as any.
Posted by Roy Peachey at 21:36 No comments: 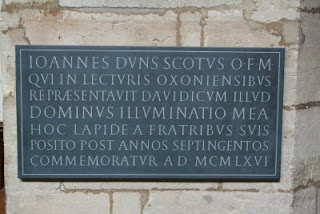 It's not that usual to cite the pope when studying English Literature but Pope Benedict XVI's General Audience on John Duns Scotus is genuinely useful for anyone wanting to appreciate Hopkins' 'Duns Scotus's Oxford'.
Posted by Roy Peachey at 21:53 No comments:

János Pilinszky - 'The Desert of Love' 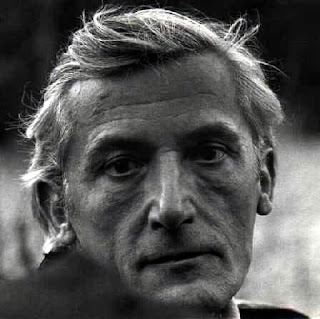 One of the greatest Hungarian poets of the 20th Century was the Catholic, János Pilinszky. Fortunately for us, some of his poems have been translated by Ted Hughes and János Csokits and published in a collection entitled The Desert of Love.

Pilinszky's life and work was largely shaped by his experiences at the end of World War II when, having been drafted into the Hungarian army, he experienced some of the horrors of the Nazi death camps. His early poetry, in particular, draws upon those shattering experiences and so it is perhaps no surprise that the silence of God is often more apparent in them than faith, hope or love. Nonetheless, Pilinszky was never a nihilist, as even terribly bleak poems like 'Fish in the Net' reveal.

A fair amount of Pilinszky's poetry is available on the web, including the haunting 'Fable' which is worth revealing line by line to maximise its potential to shock, 'The French Prisoner', which is available in at least two different translations, and 'Introitus'. However, there are also other poems, such as 'The Passion', 'Enough', and 'Exhortation' which are less readily available but which are well worth seeking out.

The Desert of Love has an excellent and highly sympathetic introduction by Ted Hughes. The only major omission is any direct reference to the horrendous political situation in Hungary during the late '40s and '50s. And yet poems like 'Introitus' can really only be understood in their political context. This is where books like George Paloczi-Horvath's The Undefeated come into their own. Paloczi-Horvath gives an extremely well-written and powerful account of those terrible years and helps us to understand why Pilinszky fell silent for so long after the success of his first collection.


Introducing Hungarian poetry into the classroom might seem a tall order but, as John Clegg of Durham University has shown, Pilinszky's poems are not only valuable in their own right but can also shed light on Ted Hughes's work. Pilinszky's poetry could also be studied alongside that of his fellow Central European and classroom favourite, Miroslav Holub, but essentially his poetry needs no excuse. It is powerful stuff and deserves to be more widely known.
Posted by Roy Peachey at 15:13 No comments: 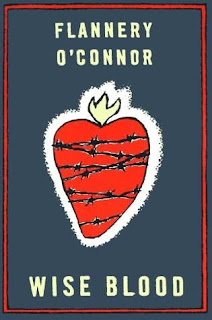 Wise Blood wouldn't be where I'd start - or where I'd end, for that matter - if I were teaching Flannery O'Connor but it's still worth a read. There are also two excellent lectures about the novel, from Amy Hungerford of Yale University, available online, so if you are teaching the work of arguably the finest Catholic writer of the 20th Century you might want to download them.
Posted by Roy Peachey at 21:33 2 comments:

'The Keys of Middle-Earth: Discovering Medieval Literature through the fiction of J.R.R. Tolkien' - Stuart D. Lee and Elizabeth Solopova

Writing in response to John Henry Newman's comment in The Idea of a University that "English Literature will ever have been Protestant", G.K. Chesterton reminded his readers that, "English literature was English a long time before it was Protestant." On this occasion at least, Chesterton was right and Newman was wrong but you would be hard pushed to know it if you look around most bookshops. We live with the tyranny of the present and readily assume that if a book is more than a few hundred years old it's not worth reading.

However, to be Catholic means to be conscious of our need for the past to help us launch ourselves into the future and no Catholic writer of recent times has been more aware of this than "the author of the century", J.R.R. Tolkien.

There have been innumerable books about Tolkien and his fiction but the value of Stuart Lee and Elizabeth Solopova's The Keys of Middle-Earth is that it takes us back to the (mainly) English pre-Reformation literature which inspired him and which was the focus of his working life. Lee and Solopova, who can also be heard talking about Tolkien at Oxford in podcasts from Oxford University, give us an overview of Tolkien's life and career, a basic introduction to the three languages which he drew upon when writing his fiction - Old English, Middle English and Old Norse - and a survey of the main thematic parallels between his fiction and medieval literature. So far so technical, you might think. Perhaps. But even Tolkien enthusiasts will gain new insights from Lee and Solopova's overview.

What really distinguishes the book from others on the market though is what comes next: passages from Old Norse and Old and Middle English literature printed alongside commentaries on the parallel passages from The Hobbit and The Lord of the Rings. So, for example, we discover the roots of Mordor in Beowulf and Sir Gawain and the Green Knight. For anyone who has read Tom Shippey's excellent The Road to Middle-Earth, little of this is new but what is different is the presentation. By giving us relatively lengthy passages from early English literature, Lee and Solopova force us out of our contemporary shells.

One of the most intriguing sections in their book, for example, comes when they compare the crossing of the Nimrodel and the entry into Lothlórien with Pearl, the Middle English poem about the death of the poet's daughter and his dream vision of her on the other side of a heavenly stream which flows out from the throne of God. In most modern fiction the afterlife is usually ignored, parodied or mocked but neither Tolkien nor the Pearl poet succumbed to these temptations and their writing is the richer for it. What we get in Lee and Solopova's book, in other words, are new insights into Tolkien's fiction and a glimpse into the rich world of pre-Reformation English fiction, a world that is now all but forgotten by most readers.

I have only two minor quibbles with the book. Firstly, the authors repeatedly refer to Tolkien's "novels". However, as Tom Shippey pointed out in The Road to Middle-Earth, one of the reasons why The Lord of the Rings is interesting is precisely because it is not a novel. Rather he demonstrates that "the basic structural mode of The Lord of the Rings [is] the ancient and pre-novelistic device of entrelacement." This may seem like a minor semantic quibble but, since novels "have rights to that designation only insofar as they display their origins in and their debt to the Northern European Protestant matrix," according to Valentine Cunningham, Professor of English Language and Literature at Oxford University, the issue is actually of profound importance to Catholics. Tolkien is one of the few Catholic writers of fiction to have been aware of the fundamentally post-Protestant, secular nature of the novel and also, crucially, to have done something about it.

My second quibble concerns Lee and Solopova’s use of the term "medieval" throughout their book, even though they acknowledge that "it is a term that now has a derogatory connotation". The truth of the matter, as C.S. Lewis long ago demonstrated in his book on 16th Century Literature, is that the term has always had a derogatory connotation. It is in its very essence a put down, a criticism, an attack. And this matters because by using the word "medieval", Lee and Solopova unwittingly help to bolster the tyranny of the present which I referred to at the start of this post.

On his recent trip to Portugal, Pope Benedict said that, "Today's culture is in fact permeated by a tension which at times takes the form of a conflict between the present and tradition. The dynamic movement of society gives absolute value to the present, isolating it from the cultural legacy of the past, without attempting to trace a path for the future." The great value of Tolkien's fiction and The Keys of Middle-Earth, despite my quibbles, is that they help us to escape from this conflict. They also provide the Catholic English teacher with a ready-made way into pre-Reformation literature and for that alone we should value these books.
Posted by Roy Peachey at 22:03 No comments: 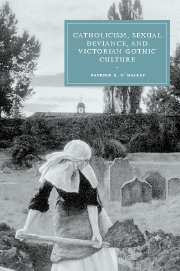 The Gothic is an extremely popular A Level option, partly because it's so much fun to teach, but it does raise interesting questions for the Catholic English teacher because of the apparently inextricable link between the Gothic and anti-Catholicism.

There are many books and articles which address this issue, the most significant recently being Catholicism, Sexual Deviance, and Victorian Gothic Culture by Patrick R. O’Malley. Marina MacKay has also written an extremely interesting article about ‘Catholicism, Character and the Liberal Novel’ [Twentieth Century Literature, Vol.48. No 2 (Summer 2002), pp.215-238], in which she argues that anti-Catholicism is a feature of some of the most celebrated works of English fiction, mentioning Villette and Northanger Abbey as two key examples.

Fortunately, the Gothic did move on. According to Victoria Nelson in ‘Faux Catholic: A Gothic Subgenre from Monk Lewis to Dan Brown’ [boundary 2 34:3 (2007) Duke University Press], the Gothic divided into three separate strands during the 19th Century: the anticlerical, the supernatural, and the romantic. Nelson's article perhaps doesn't reach the heights of MacKay's but it does suggest a useful point of departure for English teachers. Much useful work has been done on providing Catholic responses to The Da Vinci Code (including articles here and here) but I wonder if placing Dan Brown's work in its historical, anti-Catholic context makes the point rather more effectively than answering his fictional claims point by point.

O'Malley's book is particularly useful in providing a historical context for studies of the Gothic. As he points out: "in its ideological structure, the English Gothic novel, though it typically represents Catholicism, is fundamentally a Protestant genre." This is not a matter of complaint but a description of a crisis in the very notion of a British Protestant identity, as the development of the Oxford Movement, the high-profile conversions to Catholicism and the restoration of the Catholic hierarchy ensured that Catholicism, far from being a relic of the past, instead "erupted into the present".

What is more, rather than being a foreign perversion, as suggested by Monk and others, Catholicism "may rather be endemic to British history, culture, and religion . . . the skeletons in the closets – and cloisters – of Britain’s (and Ireland’s) past".


And what a horrifying thought that would have been.