Belloc on the Mass 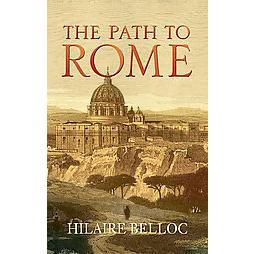 As I mentioned in my last post, I'm reading Belloc's The Path to Rome, which is full of wonderful purple passages. Here, for example, is what he has to say about "a day one has opened by Mass ... [which is] a source of continual comfort to me".


"This comfort I ascribe to four causes ... and these causes are:

1. That for half-an-hour just at the opening of the day you are silent
and recollected, and have to put off cares, interests, and passions in
the repetition of a familiar action. This must certainly be a great
benefit to the body and give it tone.

2. That the Mass is a careful and rapid ritual. Now it is the function
of all ritual (as we see in games, social arrangements and so forth)
to relieve the mind by so much of responsibility and initiative and to
catch you up (as it were) into itself, leading your life for you
during the time it lasts. In this way you experience a singular
repose, after which fallowness I am sure one is fitter for action and
judgement.

3. That the surroundings incline you to good and reasonable thoughts,
and for the moment deaden the rasp and jar of that busy wickedness
which both working in one's self and received from others is the true
source of all human miseries. Thus the time spent at Mass is like a
short repose in a deep and well-built library, into which no sounds
come and where you feel yourself secure against the outer world.

4. And the most important cause of this feeling of satisfaction is
that you are doing what the human race has done for thousands upon
thousands upon thousands of years. This is a matter of such moment
that I am astonished people hear of it so little. Whatever is buried
right into our blood from immemorial habit that we must be certain to
do if we are to be fairly happy (of course no grown man or woman can
really be very happy for long--but I mean reasonably happy), and, what
is more important, decent and secure of our souls. Thus one should
from time to time hunt animals, or at the very least shoot at a mark;
one should always drink some kind of fermented liquor with one's
food--and especially deeply upon great feast-days; one should go on
the water from time to time; and one should dance on occasions; and
one should sing in chorus. For all these things man has done since God
put him into a garden and his eyes first became troubled with a soul.
Similarly some teacher or ranter or other, whose name I forget, said
lately one very wise thing at least, which was that every man should
do a little work with his hands.

Oh! what good philosophy this is, and how much better it would be if
rich people, instead of raining the influence of their rank and
spending their money on leagues for this or that exceptional thing,
were to spend it in converting the middle-class to ordinary living and
to the tradition of the race. Indeed, if I had power for some thirty
years I would see to it that people should be allowed to follow their
inbred instincts in these matters, and should hunt, drink, sing,
dance, sail, and dig; and those that would not should be compelled by
force.

Now in the morning Mass you do all that the race needs to do and has
done for all these ages where religion was concerned; there you have
the sacred and separate Enclosure, the Altar, the Priest in his
Vestments, the set ritual, the ancient and hierarchic tongue, and all
that your nature cries out for in the matter of worship."


Later on, he describes going to Mass on the feast of Corpus Christi and comments approvingly that "the Mass was low and short - they are a Christian people".


I don't want to draw any facile conclusions but it seems that, for Belloc, "the sacred and separate Enclosure, the Altar, the Priest in his Vestments, the set ritual, the ancient and hierarchic tongue" were not incompatible with the "low and short". For him the Mass could be both "careful" and "rapid".


But all this is to see Belloc with early 21st Century eyes. What really mattered then, as it matters now, was the Mass itself and its "continual comfort".
Posted by Roy Peachey at 19:01